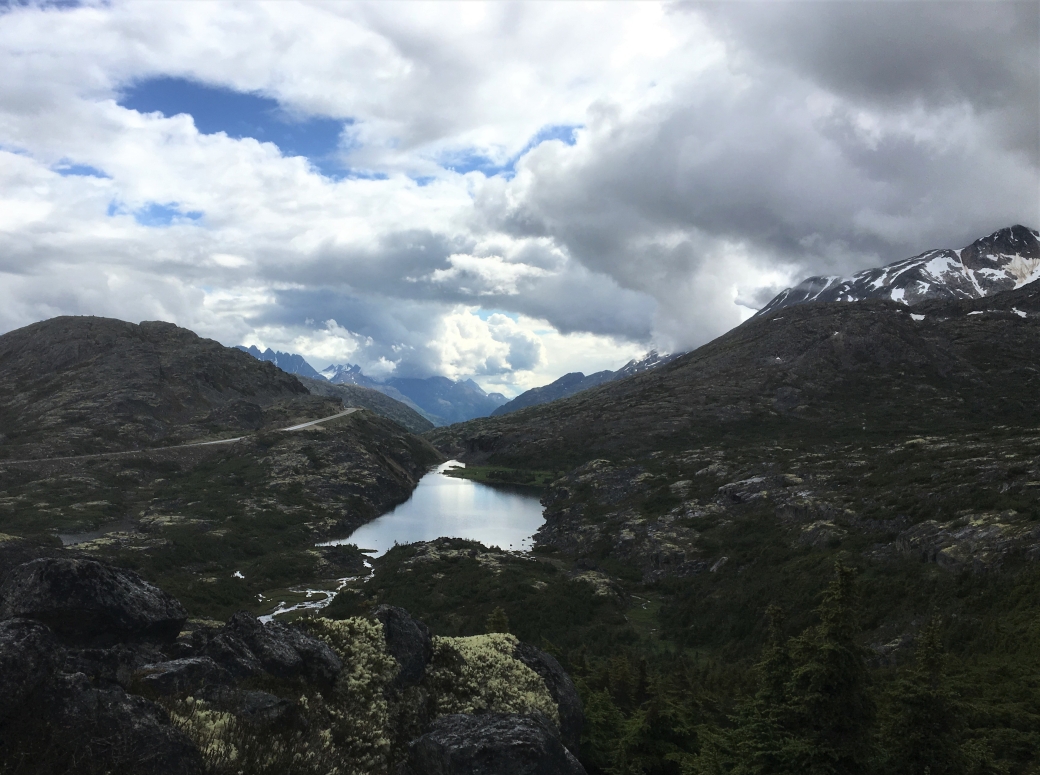 My son and I were having a great time doing a multi sport adventure in Alaska. After an incredible week of sea kayaking and white water rafting, we were ready to head into the mountains.

After our group returned from white water rafting, we met with our mountaineering guides. They went over what we would need to pack for the next four days, as well as fitted us all for mountaineering boots and crampons. We packed up our warmest gear and went to bed. We awoke at 5am on day 9 to eat and pack up our tents so we could catch the 6:45 ferry to Skagway.

Skagway is a tiny historic town a few blocks wide and with only about 1,000 residents. However it is a popular stop for Alaskan cruise ships and receives nearly 1 million visitors each year. So unlike the rugged Haines, Skagway is quaint and full of tourist shops. It is full of history, as The Klondike Gold Rush of 1896 brought tens of thousands to Skagway making it the largest city in Alaska at the time. The famous Chilkoot Trail was forged over Chilkoot Pass as a way for prospectors to get over the mountains from Skagway, until the White Pass and Yukon Railroad was completed over White Pass.

We took a van up the Klondike highway to White Pass at the Canadian border. After scrambling down and wading across a wide shallow river, we grouped up and began packing our packs. In addition to our own gear and tents, we each had to carry a pair of (heavy) plastic mountaineering boots, metal crampons, an ice axe, and a portion of group gear and food. Man were those packs heavy! Now we just had to climb 2000? feet over a few miles to get to our campsite. 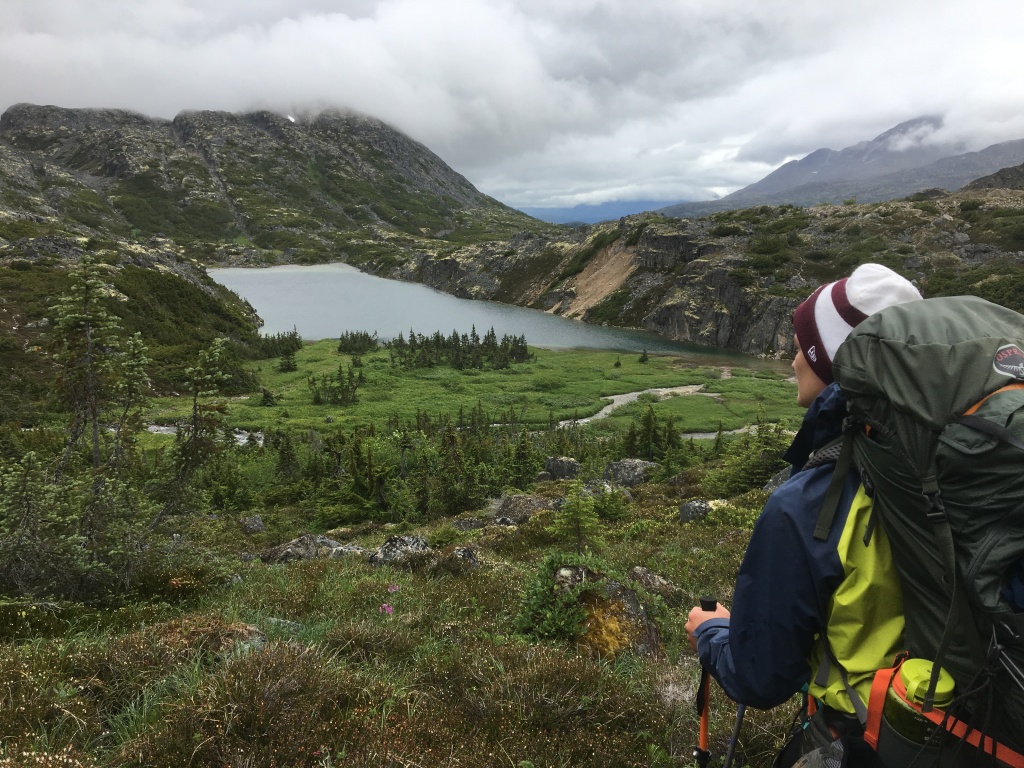 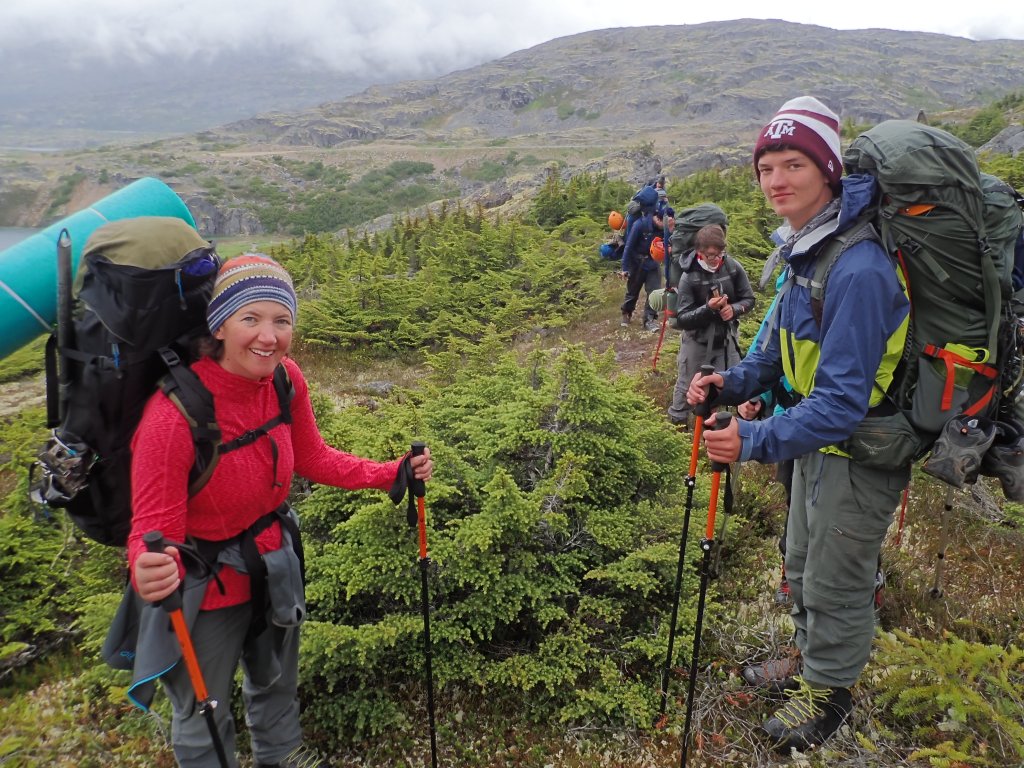 We arrived near the top of a ridge and set up camp. Thankfully, we would spend all three nights here and not have to lug our heavy packs around. 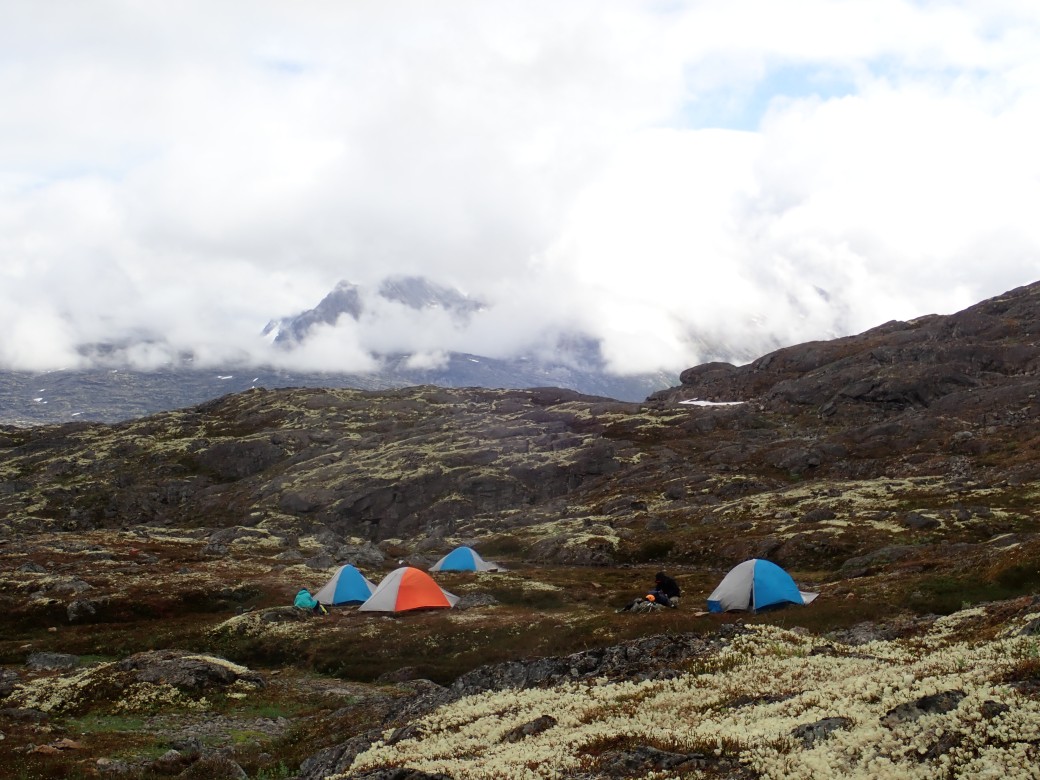 White Pass is often shrouded in fog, and on day 10 visibility was measured in feet. There would be no summitting the nearby peak today. Instead we headed to a nearby steep snowfield to practice walking in our crampons.

In the afternoon the fog cleared somewhat so we set out hiking. We hiked up and down, bushwhacking off trail, for about 7 miles in the no mans land between Chilkoot Pass and White Pass and across two countries. We crossed a river and a waterfall, lots of scree and boulders. Perfect! 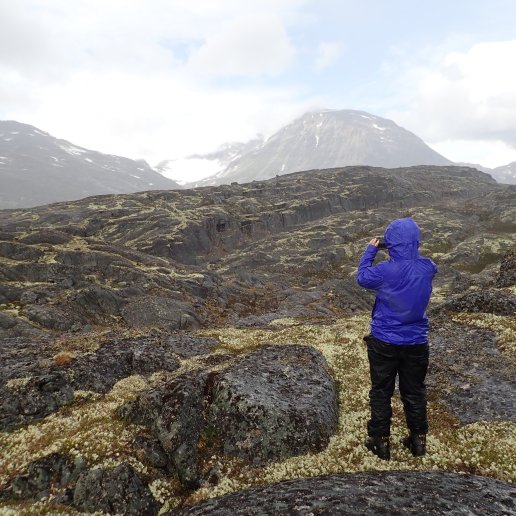 Day 11 was also drizzly and foggy. In fact, our entire 3 days/3 nights at White Pass was rainy and cold. Typical SE Alaskan weather, but unfortunately we never got to summit a nearby peak due to the weather. This day we headed over to a steep snow patch to practice self arresting with ice axes. It was actually a lot of fun. 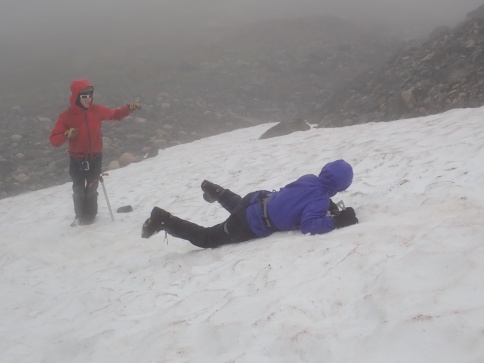 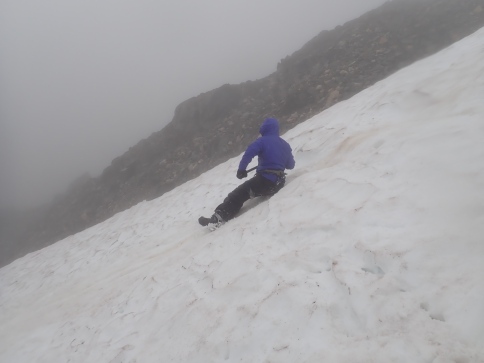 That afternoon we practiced rock climbing knots and some rope drills, but mostly we were tired of standing around in the rain so we decided to hike out first thing in the morning.

Day 12 turned sunny and beautiful of course, since we were hiking out. Such is the weather! We packed up and made the hike out.

Since our mountaineering segment had not been ideal, and we hiked out early, the Alaska Mountaineering Guides took us to a rock climbing place instead. It was a beautiful day and we had lots of fun climbing and rappelling!

So with that we returned to Skagway thinking our adventure was over. We were supposed to catch a ferry that afternoon back to base at Haines where we could shower and pack and catch an early ferry to Juneau the next morning. However, the state ferry was broken (again). The guides were trying desperately to find us a way to Haines. We spent the afternoon in Skagway, shopping and eating like tourists. Then we went to a little park to wait and cook ourselves dinner. We laid out all our wet gear to dry while we waited, playing cards and frisbee to pass the time. 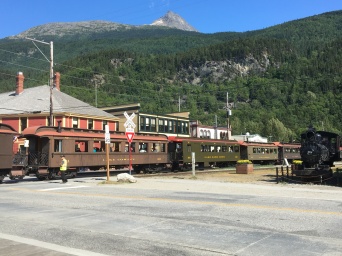 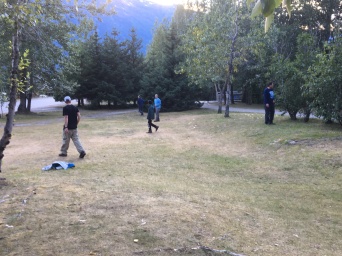 Finally, at one o’clock AM, after hours waiting around, a private ferry arrived on one engine (his  ferry was broken too, but had slogged slowly up the canal to rescue us!). We climbed on and fell asleep as he chugged us very slowly back to Haines where we arrived by 3? to catch a few hours of sleep.

Now finally in Haines, we still had no way to get to Juneau since the ferry was down. So in a wonderful turn of events, we purchased tickets on small sight seeing planes to take us the 30 minute plane ride to Juneau. The day was sunny and the ride took us over Glacier Bay National Park and the many glaciers therein. It was magnificent and was perhaps the highlight of our entire Alaskan adventure! 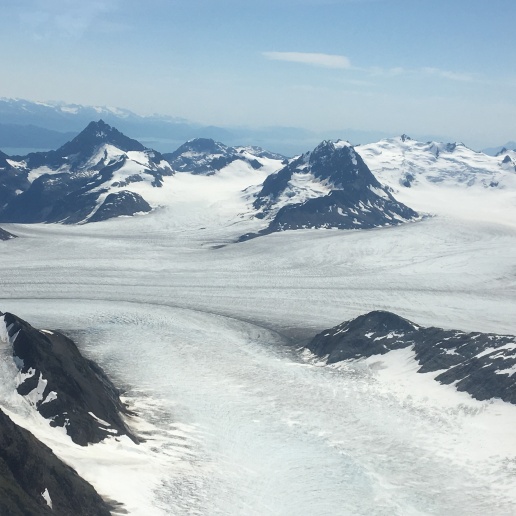 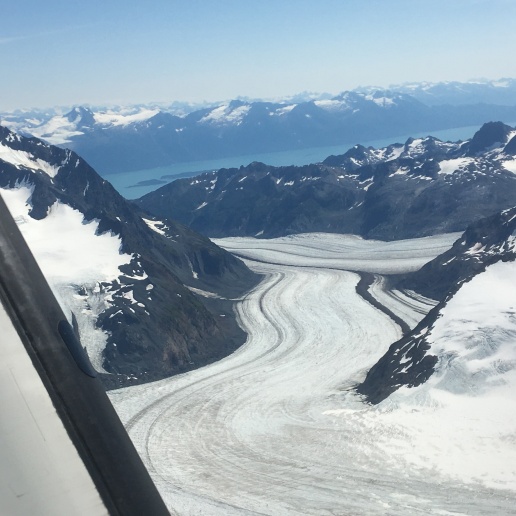 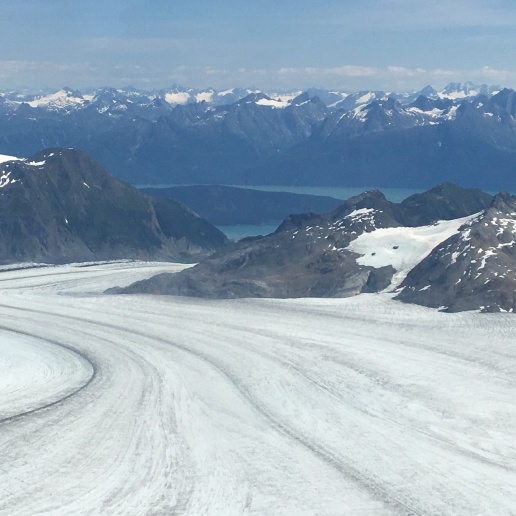 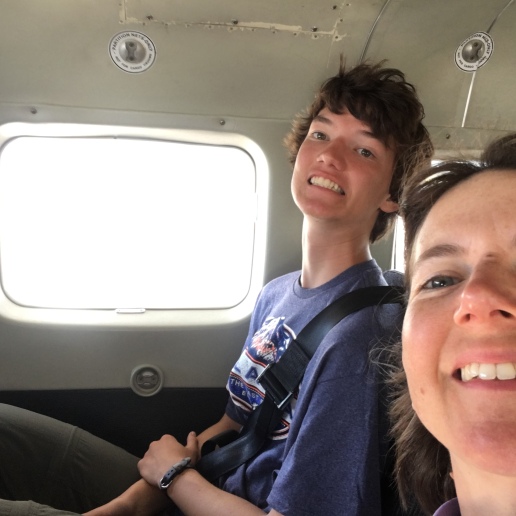 Our last day in Juneau we were able to enjoy the incredible seafood and local beer.  And now our adventure was complete. We had seen beautiful and rugged Alaska, and truly experienced it…the vastness, the wildness, from the many glaciers to the cold waters, to the majestic eagles and curious bears that reside there untouched. I cannot wait to return.

One thought on “Alaska: Mountaineering”