So I hiked the John Muir Trail. The whole blessed thing. I can’t believe I did it! Just started walking and didn’t stop for 20 days. It’s a bit more complicated than that. But here I am on the other side. So…how did it begin?

I was asked several times on the trail WHY I was hiking the JMT. I’m not really sure. I’ve backpacked with my son since he was 7, probably doing 15-20 trips together. I think I was just searching for “the next hike.” My first thru hike. Something spectacular.  A little googling and I discovered the John Muir Trail. It is touted as being the most beautiful thru-hike in the US, and that might just be true. Set in the Sierra Nevada mountain range in California, it traverses three national parks, two national forests, and two Wilderness areas. It is also 220 pristine miles long and has an elevation gain of 47,000 feet (!) with much of the trail being above 10,000 feet. It crosses 8 major mountain passes (but no roads) and ends atop the highest point in the contiguous US at 14,505 feet. And because…it’s there.

The planning and the logistics were crazy. How to get permits? (Nearly impossible) How to get to and from the trail heads? (via bus) How to resupply since it crosses no towns or roads? (mail resupplies weeks ahead) What gear is needed? When should we hike? I spent months researching and filled a spiral notebook with all I learned. I won’t spend time on logistics. It was a painstaking task though to be sure.

The first and most crucial item was asking my 17 year old son Nathan if he wanted to spend the month before beginning his senior year in high school with his momma backpacking with no cell service? Miraculously, he said yes!

Before leaving there were things to do. I did not get the highly coveted permits, so we planned to do grab walk-ups. This entails getting to Toulumne Meadows (in Yosemite NP), standing in line at about 0400, and grabbing one of the ten walk-ups they give out each day. And we could only carry 9 days of food in our required bear canisters so I had to figure out food drops. I ended up mailing food to Red’s Meadow, a mountain lodge resort, for pickup on day 4. Then I mailed food to Muir Trail Ranch, a backcountry wilderness ranch, to pick up on day 10. We had a family repackaging party a few weeks before and I packed it all up and mailed it. 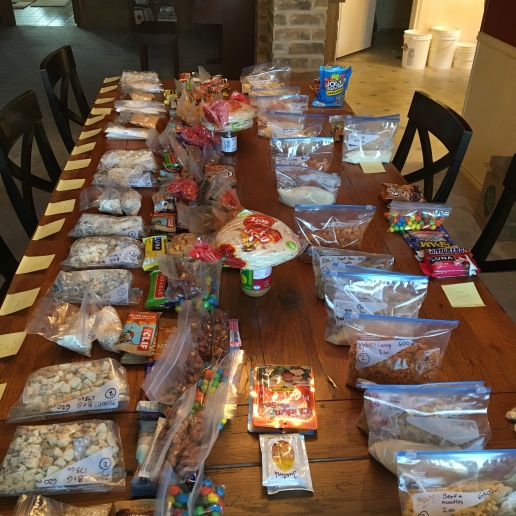 Did I pack enough calories? Would we enjoy the food? Would it get there? Who knew at that point! I bought plane tickets, figured out bus schedules, bought maps and researched campsites/sections/river crossings, and bought even more gear. I exercised as much as I could. I bought and signed up for the Garmin InReach emergency GPS tracker. I had been really sick before the hike (almost canceling) and thought it would be good to have. Plus, everyone at home could follow along with our progress. (Apparently following me became quite a thing at work!) Finally the day arrived to leave.

Day (-1): Nathan and I flew from Dallas to Fresno, CA. We wrapped our fully packed backpacks in trash bags and checked them through…the first of many “i hope this works.” But they made it and we gathered them in the Fresno airport. We strapped them on and caught the YARTS bus that would take us to Yosemite National Park. Neither Nathan or I had been to Yosemite so that was exciting in itself. On the YARTS we met our first of many fellow thru-hikers.

Arriving in Yosemite just before 5pm we popped into the wilderness center to see if there were any cancelled permits available. There weren’t, but a grumpy ranger gave us walk up permits to start hiking in Tuolumne IF we could start the next day. Since the only bus from Yosemite to Tuolumne left Yosemite the following evening at 5 pm, we doubted it.

I had reserved an actual campsite in Upper Pines Yosemite for that night and we made our way there. We camped with hundreds of people, kids riding bikes up and down the road. But it was nice and we enjoyed our first night in Yosemite. And…we had flush toilets. 🙂

Our first day we day hiked in Yosemite. I wanted to see the park and hike the popular Mist Trail. Technically the JMT begins at in Yosemite and follows the Mist Trail for the first 4 miles. Since we didn’t get the permit, we wouldn’t start hiking until mile 22 of the JMT in Tuolumne. So Mist Trail would be a beautiful warm up hike before the JMT as well as covering the first few official miles.

We started early and had the trail mostly to ourselves. It was extraordinary. The mist from Vernal Falls got us completely soaked. We continued on toward Nevada Falls and both were beautiful. We turned around and hit…the mid morning throngs of tourists. The trail was so packed it was difficult to even walk. We squeezed past them looking forward to escaping the crowds the next day. And got some great pics of rainbows in the mist on the way down. 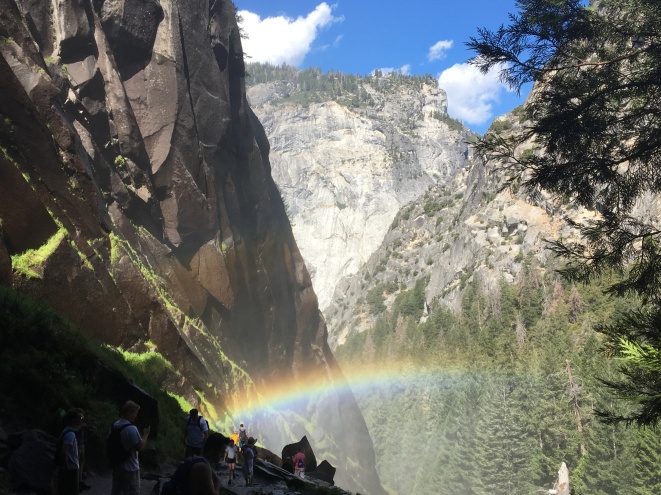 After our hike we wandered around Yosemite village, met a shuttle driver that has worked in the Park for 39 years and hiked the PCT when he was 16, met some PCT’ers, had lunch, and tried to hitch a ride to Tuolumne Meadows (TM) so we could start hiking that day. At the famous Camp 4 we sat by the side of the road for an hour with no luck. We returned to the Wilderness center and were able to get two new walk up permits to start the next day. Finally we caught the 5 pm bus to Tuolumne with permits in hand. So we did not have to stand in line at TM at 0400, and were able to start hiking the JMT the next day – a day earlier than planned. Woohoo!

The two hour bus ride across Yosemite National Park to TM was lovely. We sat behind a PCT’er who along with his dog had already hiked 1000 miles. He certainly smelled the part. Officially the TM campgrounds including the backpackers camp were closed due to snow damage (as grumpy ranger pointed out). But I had read in online forums that people were using it. So we found our way to it and sure enough, there were about 8 other people camping there. Several PCT’ers were gathered around a fire. A couple JMT’ers and other backpackers were there as well. A guy named John grilled some sausage over the fire and shared with us all. And thus began the impromptu thru-hiker community that became a part of our experience. Strangers instantly joined together by a common goal, by common struggles. We went to bed happy and excited.

“The mountains are calling, and I must go.”  John Muir

⇒ An extra word on hiking the JMT in 2017. It had been a record snow year, with the snowfall being about 200% of normal. Many places, such as Yosemite and Mammoth broke records. Mammoth received 618 inches of snow and its ski resort was still open the first week of August! Snow lingered all summer, and the rivers were swollen and potentially dangerous. So even though we were beginning later in the season (July 27) it would be a huge element of our hike.