In November 2014, Nathan, Hailey and I took a trip to Palo Duro Canyon in West Texas. It is the second largest canyon in the US and stunning. We camped for three nights and spent our days hiking. One thing we have all learned is that no matter how much we plan, the trip will never happen as we envisioned. The three of us have had some great adventures, which is to say the calamities we have experienced that now make the best stories. But sometimes, there is simply an unexpected blessing that makes a trip special.

During this trip the weather played her usual role as adventure instigator. The first day the wind had us constantly chasing our hats across the canyon. At times all three hats leapt off our heads at once…which we found pretty funny. By the last night the temperatures dropped to 23 degrees. We woke to frozen water bottles and fuzzy frost atop our Coleman stove. Donned in wool hats and long underwear and cocooned deep in our sleeping bags we learned that we really can do cold weather camping. Although it would be nice if we can figure out how to have the hot chocolate waiting for us to drink when we emerged from our tent on a cold morning rather than simply waiting to be made. 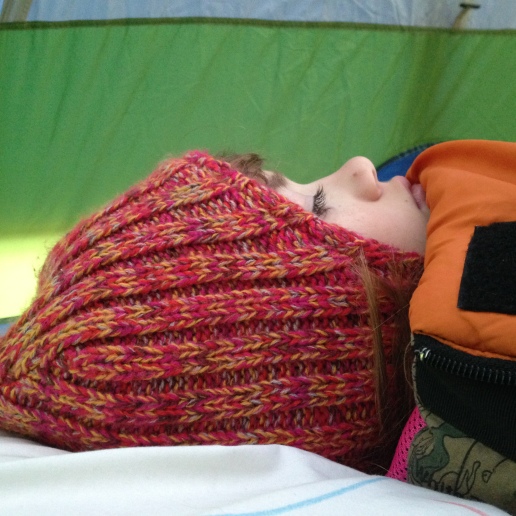 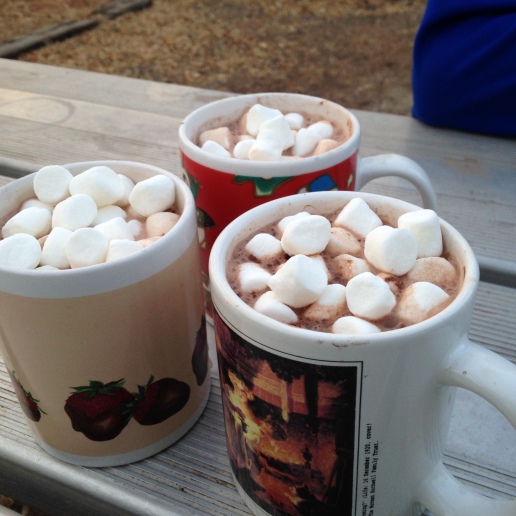 The kids and I love the stars. When camping far from city lights, especially in places like Utah or West Texas, the night sky is breathtaking. Even before your eyes are accustomed to the dark, you can see a million stars. The Milky Way lays across the sky like a plume of white smoke, only it is billions of stars together rather than smoke that give that appearance. Constellations pop out, and you can see the bull and the warrior and the scorpion. The naked eye distinguishing the red and white and blue colors of the stars.

On our first night in Palo Duro Canyon, we bundled up and laid down in the middle of the road. We oohed and ahhed at the magnificence. Wordless to express what we were seeing, and we just passed the binoculars back and forth and soaked it in. We found favorite constellations, commented on the brightness and color of stars. Staring at our favorite star clusters Hyades and Pleides we tried to count how many stars we could see in them. We waited until Orion rose in the East so we could find the nebula in his sword.

Nathan asked for the binoculars. In the black expanse he saw a fuzzy patch he wanted to check out. He focused on it and declared he had found another nebula. Nebulas are certainly our favorite things to see in the night sky so I took the binoculars and focused where he showed me. The day before our trip I had spent a few minutes studying a star mapping booklet to figure out what stars we could expect to see on a late November night. What I saw through the binoculars was a spot on replica of a large picture I had just seen in the book. “Nathan,” I said, “That’s not a nebula. That’s Andromeda.”

This is obviously a stock photo, but that’s what it looked like! Only smaller…and fuzzier.

Andromeda isn’t a nebula or a star cluster. It’s a galaxy. After the Milky Way the next galaxy in our Universe is Andromeda. And it’s 12 quintillion miles away. (I didn’t even know that was a number.) That’s a 12 with 18 zeros after it. And through the binoculars, it’s stunning. It looks like something from a science fiction movie…oval shaped, with a bright light in the middle and fading rings of light around it. And we saw it. I had seen the picture in the book, but gave no attention to it or tried to figure out where it would be. Because I never imagined we could see it. Yet here, on a cold night in West Texas, my 14 year old son found it with his naked eye and shared it with me. It’s one of my favorite memories from the trip. Unexpected.  And pretty cool.